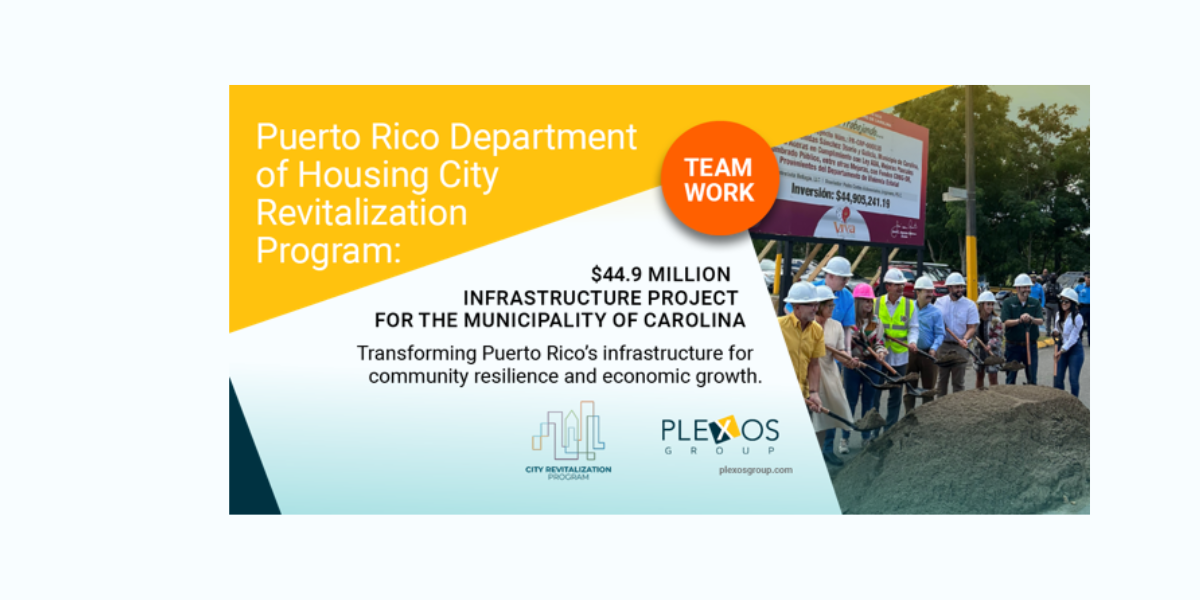 On Friday, January 13, 2023, the Governor of Puerto Rico, the Puerto Rico Department of Housing, and its partner, Plexos Group,  celebrated the kick-off of construction of a $44.9 million infrastructure project in the municipality of Carolina.

The project is funded by CDBG-DR funds through the $1.3 Billion City Revitalization Program. Puerto Rico Governor Hon. Pedro Pierluisi, joined by Secretary William Rodríguez Rodríguez, Deputy Secretary Maretzie Diaz of the Puerto Rico Department of Housing, and the Mayor of Carolina, José Carlos Aponte Dalmau, celebrated the launch of this project which centers on vehicular and flood control improvements in three phases of major avenues that serve low- and moderate-income communities.

Plexos’ efforts in Puerto Rico are led by our highly experienced Program Manager, Architect Yan Oquendo. His 23-person team collaborates with state, federal, and municipal agencies serving 21 municipalities. To date, Plexos has obtained approval of 96 projects worth approximately $239 Million on behalf of municipalities. Our staff members provide technical assistance to support CDBG-DR subrecipients in the development, implementation, program management, and compliance of their projects.

This project represents an important milestone for the City Revitalization Program where Plexos supports the municipality of Carolina at every phase, from inception through closeout. Located in a main emergency evacuation route on sections of Sanchez Osorio and Galicia Avenues, the work will improve access for evacuations, increase safety by improving traffic patterns at intersections, and boost resilience to the impacts of major storms in the future.

The infrastructure and construction improvements along the 3.5 km stretch of road includes:

“Today is a great day for the residents of Carolina as a project with a great impact on their quality of life begins. This road is one of the main accesses to the area, which has an impact on economic development and the safety of those who pass through here,” said Mayor José Carlos Aponte Dalmau. He added that the project will add 720 new jobs.

Contact Us to learn more about how we can help your organization maximize federal funding programs, limit risk, maintain compliance with federal laws, and leverage Projexis™ technology to expedite your next project.

On Friday, January 13, 2023, the Governor of Puerto Rico, the Puerto Rico Department of Housing, and its partner, Plexos Group,  celebrated the...

Plexos Group is excited to announce we will be partnering with Kansas under a Master Services Consulting Agreement to help the state plan,...

Today our colleagues in Puerto Rico jumped in to deliver supplies to the hard-hit municipalities of Patillas, Guayama, and Maunabo following...